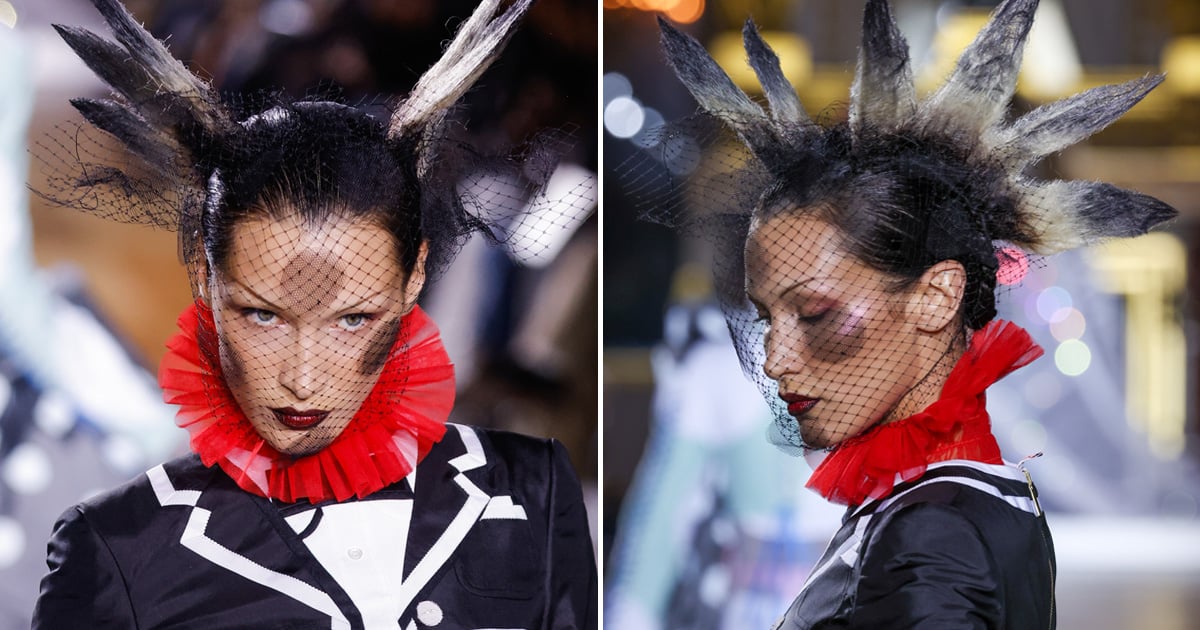 Bella Hadid’s hair defied gravity on the runway at Paris Fashion Week on Oct. 3. Whereas strolling within the Thom Browne show on Monday, Hadid debuted a sculpted coiffure held up by what appeared to be copious quantities of hair gel and spray. The completed product consisted of eight bleached and dip-dyed spikes — 4 on both facet of her head — protruding like wings in both course. Under the spikes, Hadid’s hair was slicked down flat towards her head by hairstylist James Pecis.

The coiffure added to the matador theme of Hadid’s outfit: she had on a black suit-print prime with a super-low-rise miniskirt layered over a black thong and a ruched pink bodysuit.

Make-up artist Isamaya Ffrench additionally heightened the drama of the showstopping look with thick eyeliner, metallic lipstick in ruby pink, and a pair of ’90s-inspired pencil-thin eyebrows. For one ultimate contact of futuristic edge, Ffrench added large circles of grey eyeshadow to Hadid’s brow, cheekbones, and chin, which stood out underneath the mesh veil plastered throughout her face and hair.

The supermodel’s punk-rock runway look is only one of many memorable magnificence moments she’s been having currently, together with the chunky ’90s headband she sported earlier throughout Paris Trend Week, the double-braided ponytail she wore at Beyoncé’s forty first celebration, and the baby french manicure she confirmed off in a current Instagram put up.

Take a glimpse at Hadid’s gravity-defying hairstyle on the Thom Browne runway forward.